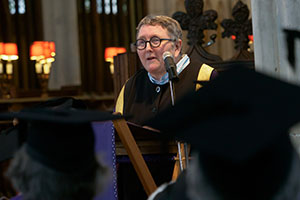 Sometimes when I look in a mirror I wonder if I am looking at a dinosaur, not only because from a certain angle I bear a startling resemblance to an elderly stegosaurus, but because I wonder if my profession is in danger of extinction.

When I was a child I had a book of poems by Robert Louis Stevenson which included the poem The Lamplighter. I loved that poem about Leerie, the lamplighter and I once asked my mother why we did not have a man with a light and ladder come round every night at tea time to light the street lamps. She pointed out that lamplighters did not exist anymore. We did not need them. In my darkest moments when I look at the declining number of universities offering theology degrees and the anti-intellectualism that infects both our society and Churches, I imagine that it will not be long before mothers have to explain to curious children that they think theologians did once exist but we don’t need them anymore. That is in my darkest moments but then I look at you and my spirits lift. As long as people like you are committed to asking deep and difficult questions about what is God is up to in the world and places like Sarum College exist to encourage and to provide a space for people to ask such questions, theology and theologians have more than a chance of survival. Congratulations on all you have achieved.

I chose as our biblical reading today the ancient and problematised ending of Mark’s gospel because I believe that the author of Mark’s gospel carefully crafted the gospel to end in a muddled mayhem of trembling, fear, astonishment, running and silence. It is here, in the womb of that empty tomb, that the life of the resurrection is born, and theology, the science of making sense of that life, begins, not in order or in clarity or confidence but in the terrifying explosion of a million destabilising, deconstructing and bewildering questions. Christians live their lives according to the rhythm of those women at the tomb, gathering and scattering, endlessly having to return to Galilee and start again to make sense of what takes place at that dawn. Theologians gather and scatter too but our vocation is to try to stay in the disorder, confusion and fear as long as we can bear it and to keep looking back into it. We, you and me, stand on the outer edge of human knowing where it meets divine being and if we do not limp or squint or stammer from the effort, we are not doing it properly. I bet and I hope that at some point during your course, if not every day or week, you felt like you were going to explode? Good. Say thank you to your tutors because that shows you were in the resurrection zone.

we stand on the outer edge of human knowing where it meets divine being and if we do not limp or squint or stammer from the effort, we are not doing it properly.

As a theologian and as one who is also a Deputy Vice-Chancellor of a Church University I want to try to stand my ground for a while before the empty tomb this morning and offer three challenges to us all to think hard about, three intersections between the womb of the tomb and contemporary life. These are challenges to us, because though you may not ever want to look at a book again, you are part of the tribe of theologians and as such you have been called to try to discern what God is doing in our world today.

If anxiety and fear cannot be engraced we will struggle to preach the Gospel to this generation.

Challenge One: My generation, a generation who had parents who survived a world war, who lived through the terror of the cold war, the troubles in Northern Ireland, the three day week, power cuts and the sexual revolution has somehow bred a contemporary generation which is beset by crippling levels of anxiety and poor mental health. How do we, you and me, proclaim the gospel afresh to an age which is afraid? One answer to that might be to somehow enable it to hear the message of the angels: Do not be afraid. But Mark does not really offer such succour. His gospel is not punctuated as Luke’s is with the injunctions against fear and exhortations to joy. Indeed, Mark’s is a gospel of fear, largely untempered by joy. Mark’s message might indeed be summarised as: Be Afraid, Be Very Afraid. For Mark, fear and trembling are a completely appropriate response to the mysterium tremendum that is Jesus (Brown, 2015, p. 127). In the face of God we are unmade. My generation fought for identity, this generation knows that these identities are built on sand and they happily play in the sand pit caused by the unmaking of those identities – male/female, straight/gay and so on. Unmaking is their thing, even if it is frightening and anxiety-inducing. The Gospel of Mark suggests that those gripped with fear and trembling and who experience unmaking share in the experience of those caught in the blast of the resurrection. It is the state in which the risen Jesus is met, out of the sight of our comprehension. Anxiety is characterised by, among other things, a desire to run away, by a lack of faith in what others tell you and by panic. The women at the tomb are having a full-scale panic attack. And that concludes Mark’s account of the good news! We cannot save this generation from its anxiety but we can attempt to redeem it by taking it to the womb of the tomb where it may become something sacred, a door way into the mystery of the resurrection. Mark presents this generation with some ancient sisters, Mary Magdalene, Mary the mother of James and Salome. The young share their fear, perhaps then they can learn from them too, that fear can be a midwife to an incomprehensibly new and wonderful reality. If anxiety and fear cannot be engraced we will struggle to preach the Gospel to this generation.

Challenge Two: For my generation, an anxious generation comes after us and lonely generation stretches before us. Men and women in their old age are being encased in isolation and silence. How do we preach the gospel afresh to this generation? By seeking to alleviate loneliness, of course. But how? Christianity has over a long period of time had a lot of positive things to say about solitude and silence as a road into the divine. For many, over thousands of years, the flight from the tomb has propelled them into aloneness, paradoxically as a means of finding relationship with the divine. Standing before the tomb together I suggest we seek to find a means of redeeming meaningless loneliness to meaningful solitude and silence. The new loneliness may demand of us a new type of monasticism for those who are sat in their houses, flats and care homes throughout the land in silence. Solidarity in silence has the potential to transform loneliness into solitude, holy solitude. We stand silent before the tomb, reduced to speechlessness by the shattering of all closures, including death. Just as the reality of the resurrection begins in fear, it also begins in silence, in the deconstruction of our language and thought. If Rumi is right that silence is the language of God and all else is poor translation, then the silence of loneliness is ripe for redemption. We need to find ways to engrace and mobilise the lonely.

Challenge Three: And finally, standing before the tomb I am reminded of the close connection Teilhard de Chardin made between academic research and mysticism. For Teilhard without research there would be no possibility of real mystical life, for, he believed that through research a new level of consciousness emerges. Research for Teilhard was a form of prayer (Teilhard de Chardin, 1968). I sometimes wonder if one of the reasons why the study of theology at universities is in danger of extinction is that in order to maintain its place in the academy we disconnected it from prayer and mysticism and continue to do so even while the boundaries between objectivity and subjectivity were dissolved by postmodernism. One hundred and fifty first year students at Winchester recently said that that the opportunity they most hoped for from being at Winchester was the opportunity to explore the spiritual dimensions of life. Even if every first year theology student is included in that 150, there are still over 100 students with that expectation who chose not to study theology (Gay, 2018). Why not? Levels of religious literacy among the young may be low but their hunger for the divine is high, they are willing to wrestle with difficult questions. They do not want easy answers, or short cuts to the divine, they want authenticity. I think that those of us responsible for the teaching of theology need to have a long, hard look at what we are teaching and the extent to which it is grounded in the authenticity of a spiritual quest. Part of the appeal of Mark’s Gospel, I think, is its authenticity. It does not try to sugar-coat the ‘good news’ or its implications and its ending in fear and silence and scattering feels like an authentic portrayal of an encounter with the divine. We need to re-ground the teaching of theology in the womb of the tomb, in the real and authentic experience of the encounter with the mysterium tremendum et fascinans.

Theology, the science of making sense of the depth of reality, begins, not in order or in clarity or confidence but in the terrifying explosion of a million destabilising, deconstructing and bewildering questions. You may have completed a course but please stay true to the questions. Feel the blast of the resurrection while you wait for God to reveal where engracing is waiting to be realised. Remember as R.S. Thomas reminds us in his poem Kneeling, that the meaning is in the waiting (Thomas, 1993). Let the silence of your speechlessness become a ladder to heaven.