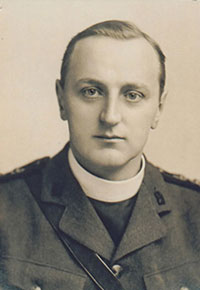 On August 19th, Sarum College will display a rare and valuable Victoria Cross – one of only 1358 since its inception in 1856 – awarded to The Revd William Addison, one of just three awarded to army chaplains in the history of the medal.

Addison became an army chaplain in WW1 shortly after he trained for the priesthood at Salisbury Theological College.

On August 19th from 3.30pm, members of the public, military chaplains, veterans and members of armed forces support organisations and others will gather in the historic buildings at 19 The Close to commemorate this notable alumnus, Padre Addison.

‘Medals are important reminders of our capacity for humanity and valour, and this one recalls the particular role of Christians in armed conflict,’ says The Revd Canon Professor James Woodward, Principal of Sarum College. ‘We are grateful to Padre Addison’s grandson, Tim Addison, for lending us this medal to make this a very special commemoration.’

The celebration marks the centenary of Addison’s award of the Victoria Cross by George V on 3rd August 1917 for his bravery in ministering to two battalions of the 38th Brigade in Mesopotamia, the modern Iraq.

‘Those awarded the Victoria Cross stand in the middle of a concentric circle of bravery,’ says Canon Professor Michael Snape, co-editor of The Clergy in Khaki: New Perspectives on British Army Chaplaincy in the First World War. ‘For every individual honoured in this way, there are many others whose acts of courage and sacrifice went unremarked. There was a broad Christian contribution to the war in the form of clergy combatants, church organisations offering aid, as well as conscientious objectors, some of whom operated under fire as stretcher bearers.’

The commemoration on Saturday August 19th begins at 3.30pm. There is no fee to attend but please do book your place, info@sarum.ac.uk or 01722 424800. A replica of the Addison Victoria Cross will later be on permanent display at Sarum College.