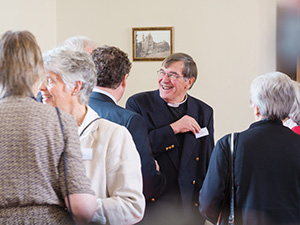 More than 80 former and present-day staff, students, friends and volunteers came together on Saturday 26 September to celebrate the twentieth anniversary of Sarum College.

The day began with a brief history of Sarum College by Hugh Dickinson, former Dean of Salisbury Cathedral (transcript available here); Bruce Duncan, Sarum College’s first principal; Keith Harnden, Sarum College architect (since 1995); and Keith Lamdin, who retired as principal in July 2015. James Woodward, the incoming principal (from October 1st) then spoke about the next stage in the College’s development.

This was followed by a talk on ecumenism entitled, The Triune God: Reshaping Identity, by The Revd Elizabeth Welch (transcript available here) who chairs the Society for Ecumenical Studies and is the Reformed co-chair of the new round of International Dialogue between the Anglican Communion and the World Communion of Reformed Churches.

Elizabeth and the previous speakers were joined in a discussion on ecumenism by The Revd Colin Norris, Regional Minister, Southern Counties Baptist Assoc. and one of the first MA in Christian Spirituality graduates (2003); Sr Mairead Quigley, Religious, Society of the Sacred Heart, Chaplain of Sarum College, pastoral tutor to MA students and The Revd Tom Stuckey, Visiting Scholar of Sarum College and former President of the British Methodist Conference.

Dr Paula Gooder spoke about her new book, Journey to the Manger over tea. The afternoon ended with a special Choral Evensong service in Salisbury Cathedral to give thanksgiving for twenty years of Sarum College and the Cathedral Schools reunion.