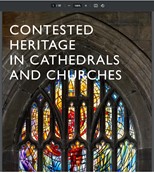 Sarum College Trustee the Revd Chigor Chike says the starting point for dealing with publicly displayed objects which glorify oppression should be to remove them.

Responding to the May 11, 2021 Church of England report which offers a decision-making framework for parishes and cathedrals to address concerns about publicly displayed objects with so-called ‘contested heritage,’ Chike welcomed the review but disagreed with guidance to retain monuments, statues and memorials unless there is a reason to remove it.

‘I see it the opposite way,’ Chike said in an interview with Audrey Carville of BBC Radio Ulster on Sunday, 16 May. ‘If something is clearly linked to slavery and the slave trade, there should be a presumption of removing it unless we can find a way of retaining it in a way that doesn’t cause offence.’

He said that while he agrees the range of options needs to be explored, including the question of contextualising or leaving the object in situ, ‘but on the whole we should be leaning towards removing it because these things can cause offence and … they make it difficult to be the kind of Christian we want to be’.

Asked if he could envisage a situation where cultural objects are left in place and explained honestly to reflect ‘the true history of the time’, Chike said:

‘The trouble is that monuments that are in church are not for marking history,’ but rather to show approval.

If we are thinking of marking history, the place to do that is museums, Chike said.

‘So in some cases these objects can be taken from churches and city centres and taken to museums. People who are interested in that aspect of history can go there to look at it.

‘The slave trade was a horrific trade. There is no good side to this. There are no two sides,’ he said.

‘Sometimes people talk as if there are two sides to this argument. Well, on the slave trade there are not two sides.’

Listen to the full interview on BBC Sounds (starts just after introduction, about a minute in)

The Revd Dr Chigor Chike is a parish priest, theological educator and social justice activist. He is the former National Adviser to the Committee for Minority Ethnic Anglican Concerns.