What is a person?

Home News What is a person?

By The Very Revd Hugh Dickinson 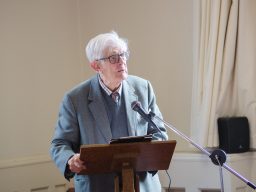 Consulting the Oxford English Dictionary on this question is really not very helpful. It has a large number of quotes, illustrating the variety of ways the word is used, but avoids any attempt to define its meaning, leaving us to assemble meanings from the various contexts in which we use it.

The fact is that we know perfectly well what a ‘person’ is most of the time from our own ‘personal experience’ of being a person, although we may hesitate in the contexts of our pets or our farm animals. Zoo keepers are in no doubt about their charges, but they may be anthropomorphising. Some botanists are even suggesting that plants may have a dawning intelligence, which may be the first tentative step towards personal existence. Personal being may evolve by minute accretions, but it is clear that we will never isolate it in a test tube. We only find it by (subjective) personal engagement. It takes one to know one.

This is in fact a common experience. We find it difficult to describe a colour or a sound in words. So manufacturers of art materials label a pigment lemon yellow, or rose red, or just orange, which gives us a useful metaphorical language to communicate with other people so long as they are not colour blind or Esquimaux – using the language of our shared personal experience of citrus fruit or flowers. So ‘personal’ implies an individual consciousness and autonomous agency in some way akin to our own, one with whom it is possible to have some kind of reciprocal engagement and response. We look into the eyes of a potential respondent as he or she looks into our eyes and immediately register a potential ‘partner’. A humanoid robot can pretend to be a personal respondent, but fools us only briefly. There is no doubt about dogs, but we are less confident about horses and birds because the ocular signals of engagement are less clear. Those who live closely with less highly evolved animals can seemingly recognise less sophisticated or more subtle signals of personal involvement. I knew a woman who had a very affectionate relationship with a highly intelligent parrot. We may not be able to distinguish between personal and autonomic responses, which seem to merge seamlessly. It seems that the personal is a gradient whose lower end is possibly minuscule but whose upper slopes may be beyond anything we can imagine.

So, what about God? In Biblical times gods were invisible super men or women with whom we may have felt some kind of personal engagement. Just as painters use ‘lemon’ to mean a particular shade of yellow, so we have used ‘human plus’ to denote goddity, the ‘plus’ being signalled by animal heads on human bodies, or gross exaggerations of the human form like the gods of the South and Central American empires.

The Christian religion also has a ‘human plus’ theology, but the ‘plus’ invokes the foundational values of the Transcendent. That is, those values which cannot be credited to evolutionary processes — Truth, Love, Holiness, The Sacred, Beauty, Goodness — but which are embedded in the natural world, as Paul says in Romans. These exercise a ‘gravitational’ pull on the human heart, like an invisible field of force. In his monumental books Iain McGilchrist suggests that it is the right hemisphere of our brains which is open to the influence of these foundational values and actively responsive to their creative and personally transforming power.

Christian theology affirms that the Incarnation is the moment when the infinite Creator Spirit of the Universe puts on the physical world like a robe, or reveals Itself to have been from the first quietly investing matter with Transcendence and personhood. Jesus of Nazareth lived a human life which at every moment is motivated by the foundational values by which he is possessed. In doing so he reveals the bitter truth that the world is largely motivated by forces savagely opposed to the Divine foundational values. The death of Jesus embeds the foundational values indissolubly into the historical process, by the Christ Spirit gradually taking possession of great swathes of the human race, not necessarily explicitly, but by the gravitational attraction of the field of force of the foundational values.

That suggests to me that as creatures evolve they become increasingly capax Dei, that is they ‘participate in the Divine Nature’ and become more personal and enabled to engage in increasingly profound transactions of the heart, the ultimate respondent Heart in this case being the infinitely profound Heart Of God.