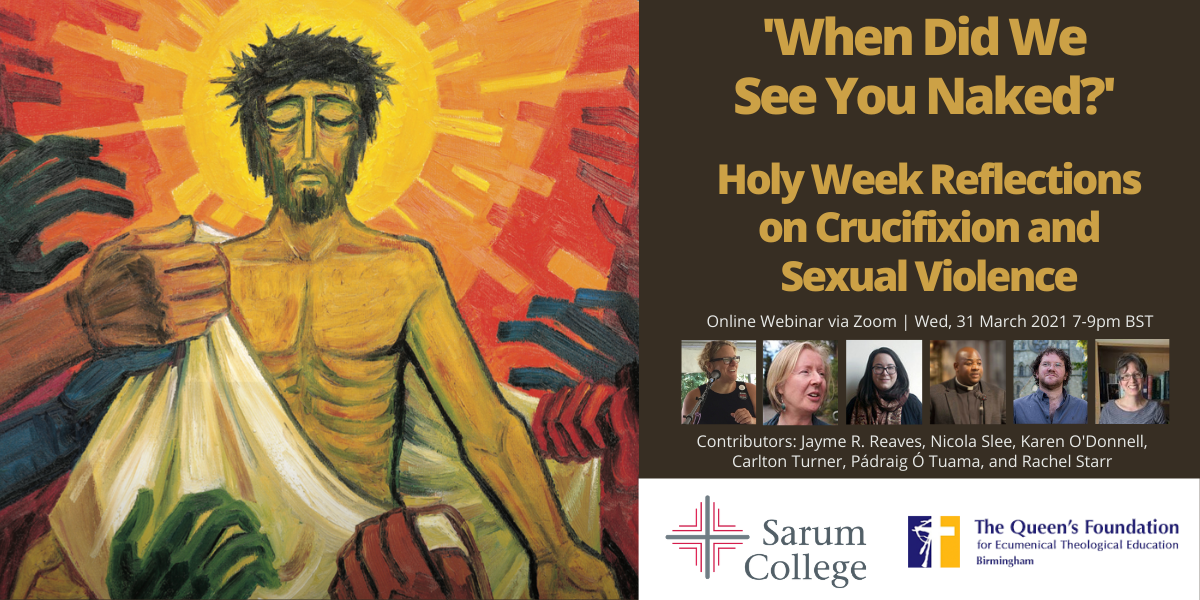 Considering the links between the crucifixion and sexual abuse

Home News Considering the links between the crucifixion and sexual abuse

Was the stripping and exposure of Jesus a form of sexual abuse? If so, why does such a reading of Jesus’s suffering matter?

In a Church Times article (1 April 2021) Dr Jayme Reaves, Director of Academic Development at Sarum College, says: “The Church hasn’t done a good job of responding to victims of abuse and seeing Jesus as a victim should make us think about how we respond to them, because we still stigmatise and blame them.”

Dr Reaves is co-editer of a ground-breaking book on the subject: When Did We See You Naked? (SCM Press, 2021), along with Professor David Tombs, and Dr Rocio Figueroa. Dr Karen O’Donnell, Programme Leader for postgraduate study programmes in Christian Spirituality, is also a contributor, along with an impressive and international group of scholars from various disciplines.

The book acknowledges the biblical textual evidence to acknowledge Jesus as a victim of sexual abuse has rarely been addressed or even noticed, and so it is an unfamiliar perspective for most people. But, according to the Gospel texts, Jesus was publicly stripped naked at least three times during his crucifixion ordeal.

As a torture practice of the Roman empire, the naked public exposure of Jesus at the hands of the Roman soldiers and on the cross was an act of sexual violence used to intimidate, terrorise, and shame victims and communities.

Therefore, the book considers what we mean by the term ‘sexual abuse’ and seeks to broaden the established narrative and to notice the gaps in the story that have heretofore been untold and/or unacknowledged. Sexual abuse points to what is speakable – and what is unspeakable – in the suffering Jesus experienced.

This book seeks to speak of the unspeakable in the belief that it has potential for positive consequences and not just pain.

The video of the 31 March Holy Week reflections event is available here for anyone to watch it for the first time or revisit it.

Jayme Reaves and David Tombs explain in an SCM Blog why it matters that we acknowledge Jesus as a victim of sexual abuse.

This book is available from SCM Press