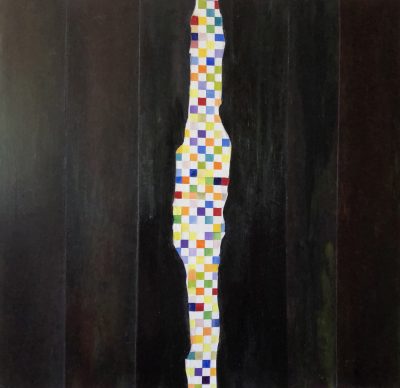 Joy Hillyer’s paintings aim to convey a sense of place, of placement and exploration within the landscape. She is concerned with the ambiguity of the liminal: the juxtaposition of the real and the imagined; the interplay between essence and symbol, between light and darkness; the ephemeral and the enduring.

Mountain Refuge is a series of paintings that take their inspiration from glimpses of the landscape through windows in mountain huts, openings in road tunnels, cracks in doors. She does not try to portray with detailed realism: the point was not to paint the views but to capture the revelation of colour and light outside while leaving an ambiguity about the darkness of the shelter.

Light is not always benign…it can be pitiless. Two of the Mountain Refuge series (which can be identified by their more sombre palette) relate to the windows in the North Face of the Eiger. In the early 20th century would-be rescuers watched helplessly as a climber died before their eyes on the other side of the window.

The other paintings in the exhibition (apart from the triptych of the American Desert in the refectory) also take their inspiration from the Swiss Alps. Five paintings from the original Nonet provide fragments of detail or wider landscapes. Footfall  (an image from a mountain path) is a forerunner for a new series on which Hillyer is working (‘Pavements of Gold’)

Joy Hillyer had a career in law and legal education before taking an honours degree in garden design and attending art courses taught by Sophie Hacker. From 2012 to 2014 she attended Advanced Painting Practice at Morley College, London (tutors Steve Wright and Guillem Ramos-Porqui). After seven years in Central London she now works from her studio in Wiltshire.

The exhibition is free but you must book your visit: contact us on hospitality@sarum.ac.uk / 01722424800. Please note our new safety protocols. We are open 10am to 4pm each day.

The exhibition runs until 28 September 2020. There are cards and unframed prints for sale on premises.