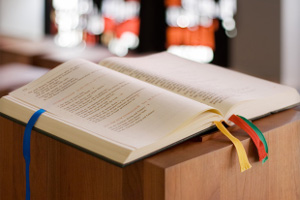 ‘The conversion of Saul’ is the heading in my bible. I think that this is odd.

As I understand ‘conversion’ in this context it would mean ‘changing one’s religion’. Saul does not ‘change religion’. Christianity as we know it does not exist and the followers of Jesus are Jews ‘who belong to the Way’. And just as Saul had planned: he visits the synagogue in Damascus (v.20).

I think that if I had to write a heading for this passage it would be: ‘The calling of Saul’. Jesus calls him to ‘do’ something different (v.6). Instead of persecuting Jesus Saul is to bring the name of Jesus before Gentiles and kings and before the people of Israel (v.15).

With this change in calling, the content of Saul’s Jewish faith does change somewhat, but the radical change is in his actions, in his work rather than in his religion. Unconsciously I associate the change of name from Saul to Paul with this story of his calling, but that is not part of it at all.

Saul is the Hebrew (Jewish) name that means ‘asked for’; while Paul is a Latin (Roman) name that means ‘small’ or ‘humble’. He clearly used both probably depending on the cultural context. In this passage Jesus asks for Saul to be his witness. What is your calling?