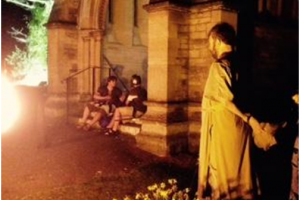 The Passion Story Revisited, A Reflection

Knee-deep in preparations for Holy Week I had a phone call asking me if I’d like to attend the Poole Passion as a representative of Sarum College.

I’d spent the weekend before at Sarum College as part of my ministerial training exploring ‘urban ministry’. And here was a beautiful example of work sprung up from the community embracing the wealth of people from an urban context. Those involved in the re-telling of a story which ‘resonates to those of the Christian faith, no faith and to other faiths, as the story is a vehicle for a powerful and enduring truth, that of the redemptive aspect of love.’ (from Poole Passion’s website)

The Poole Passion first performed in 2009 now has a strong tradition itself incorporating amateur and professional members of the community who work collaboratively to shape thought-provoking and emotive biennial re-enactments of Jesus’ last days. This year’s performance, ‘Through the eyes of a child,’ focused on telling the story from the viewpoint of a 12-year-old girl. The performance moved from one church building, via a green space opposite busy restaurants and pubs, to a churchyard and finally another church building. The physicality of moving from place to place mirroring the movement of Jesus to the place of crucifixion complete with, at times, echoes of the jeering crowd from various passers-by!

The performance was punctuated by monologues, pieces of music and projected filmed images, including a light show projected onto the outside of a magnificent church building. There was an interactive sense throughout and, as with immersive theatre, those watching were invited into the story. I was particularly moved by a scene which involved sharing of bread amongst cast and audience – although maybe participants would be a more accurate term. There was a Eucharistic quality in it; the sharing of bread with a mixed band of people, all from different walks of life, each coming to the performance with different perspectives, each finding themselves in different facets of the Passion of Christ.

For me this was the perfect lead-up to Holy Week. An opportunity to hear afresh the story which can at times seem too familiar. It was a privilege to be told the story in such an interesting way and by a community of people so evidently impacted by the storytelling process.