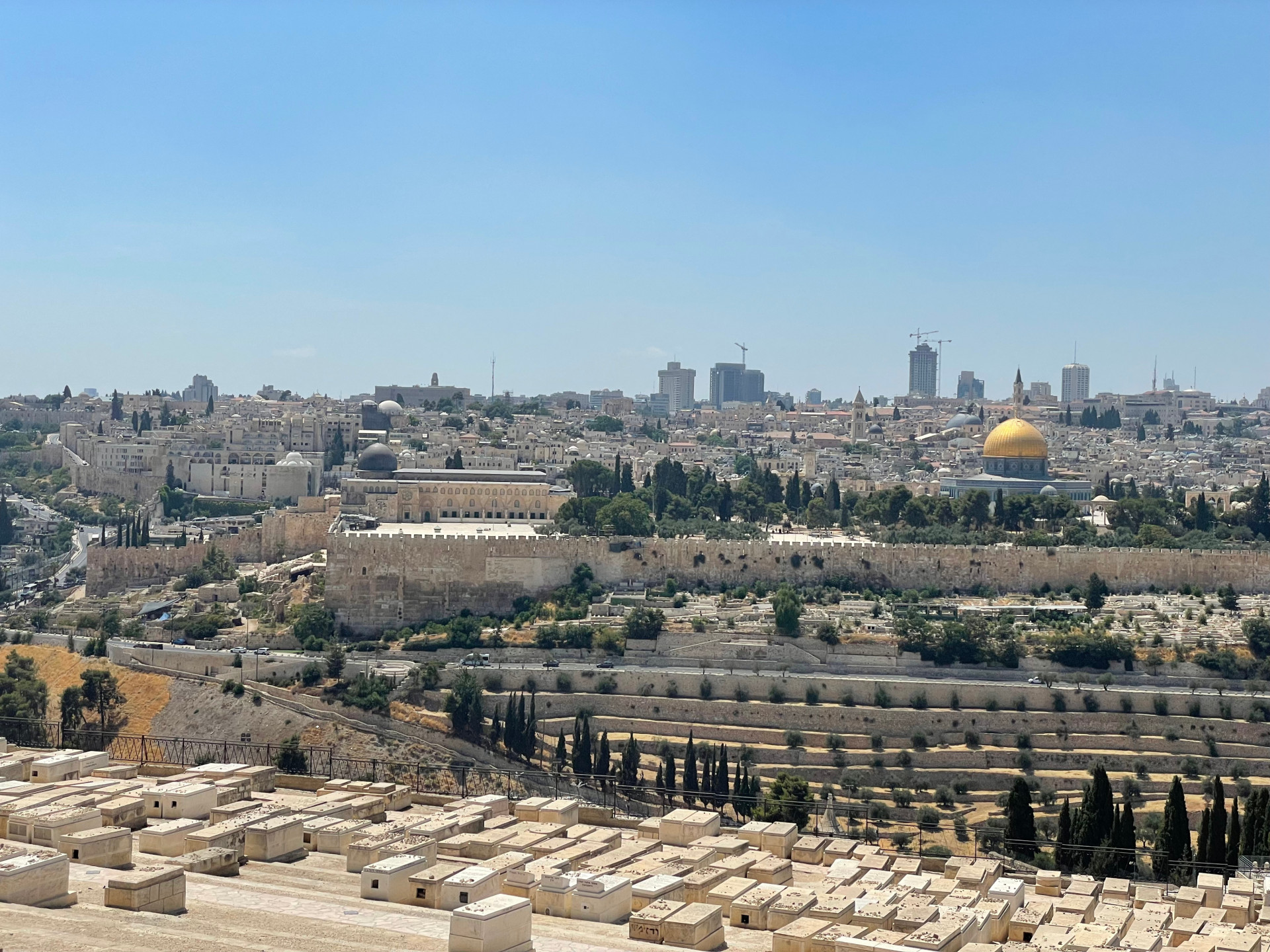 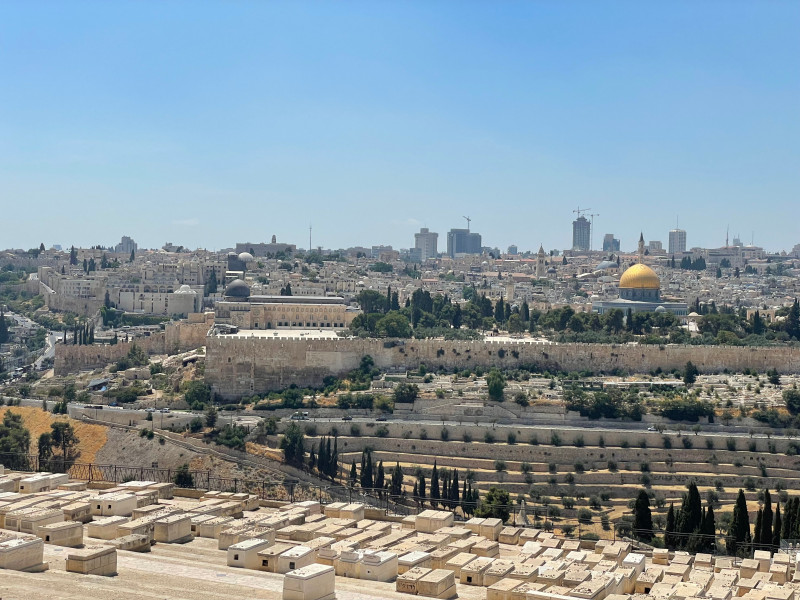 Last month I returned from a study pilgrimage to the Holy Land, along with several other alumni and ordinands from Sarum College and beyond, courtesy of the British Regional Committee of St George’s College, Jerusalem.  They offer heavily subsidised pilgrimages every two years to enrich the ministry of those entering ordained ministry in the Anglican Communion — blessing students to bless congregations and beyond.

Our base was St George’s College and Cathedral, a place of tranquility a short walk from the bustling streets of the Old City. From there we were taken to start our pilgrimage in the traditional way with a visit to the Church of The Holy Sepulchre — a church built on and around the place of Christ’s crucifixion, burial and resurrection. 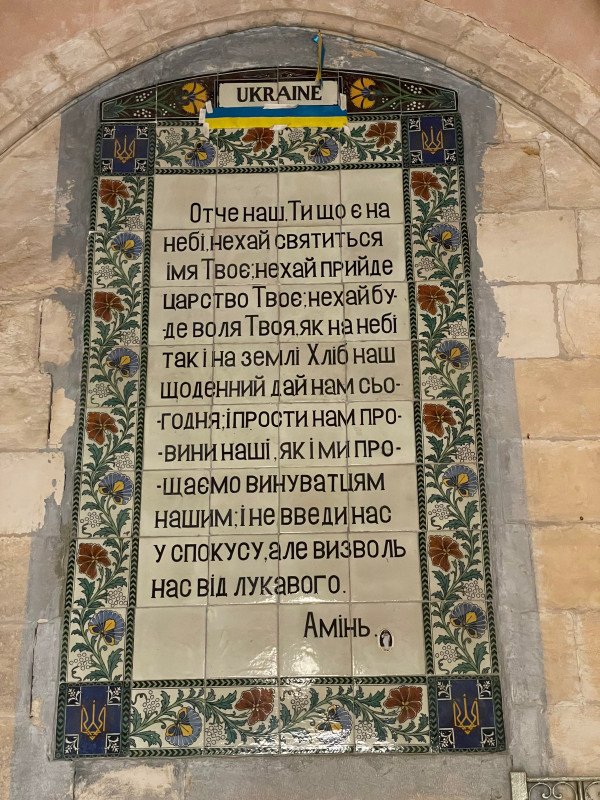 Approaching the Holy Sepulchre gives a sense of the multi-faith aspects of life in Jerusalem, with Judaism, Islam and Christianity crossing paths with each other on the narrow and packed streets of the old city.  It also gave a taste of the multi-denominational aspects of Christian worship in the Holy Land, with the space both inside and outside the Holy Sepulchre curated by Christians from around the world. Encountering numerous ways of giving thanks for Jesus’s sacrifice and salvation reveals the challenge and blessing of the vibrant diversity. The  experience reminds us that through Jesus, difference can not just coexist but cooperate and celebrate our uniqueness.

The diversity of the Holy Sepulchre was reflected in how the students and staff each reacted to the different sites.  What sparked a profound encounter for one did not always ignite another’s imagination.  I, for one, struggled to engage with Christ’s tomb due to the living stone being hidden beneath a marble façade and filled with icons and gold; but was brought to tears by the simplicity of the stone on which Christ’s body was thought to have been anointed upon before burial.  For some, the reverse was true — there was no one way in which each person present encountered God. Sharing our different reactions and reflections throughout our time together in Israel and Palestine became an enriching experience in itself, one that enlarged our own appreciation of traditions within the Body of Christ.

Like many pilgrimages to the Holy Land, our time there had us travelling throughout a land that provokes strong reactions, whether they be spiritual or physical, political or cultural. This was no clearer demonstrated than when, thanks to the work and integrity of the staff at St George’s College, we were granted a tour of Al-Harem Al-Sharif; also known as Temple Mount — it was the site of the Second Jewish Temple that was destroyed in 70 AD. The windows of the mosque damaged by gunfire from the Jewish Quarter, and the presence of Orthodox Jews being escorted around the sacred site by machine-gun-toting soldiers from Israel, exposed us to the tension between Judaism and Islam in lands holy to them and to Christians. We met representatives from Musalaha, an organisation that seeks to do just this: pursue the hope of peace in Israel and Palestine by helping to reconcile those separated by faith, suspicion, and politics. At the Church of the Pater Nostra, the placement of Lord’s Prayer in Ukrainian in the same space as the Russian version gave hope of peace in conflicts further afield.

Like the political heat, the physical heat also connected our imagination to the reality of life as chronicled in the Bible. On our air conditioned coach, we travelled to different sites in a comfort that contrasted sharply with how it would have felt to move through landscapes baked by the desert sun. It brought alive the challenge of living and travelling that Jesus, the Disciples and others would have experienced with at best a donkey to navigate the rocky terrain between the safety of shelters.  We connected even deeper to Biblical experience through the waters Jesus spent time in, on and beside.  Reaffirming my baptism vows in the River Jordan, in the area where John the Baptist baptised Jesus was a profound experience — one I hope to extend to others through the water I brought home with me to infuse into water of baptisms I will be privileged to preside over in the future.  A further highlight was standing among the archaeological remains of Bethsaida where my namesake, the Disciple Andrew, lived and left to follow Jesus. It was amongst such natural spaces that I connected most deeply with the reality of what the Bible describes, stripped as they were of that 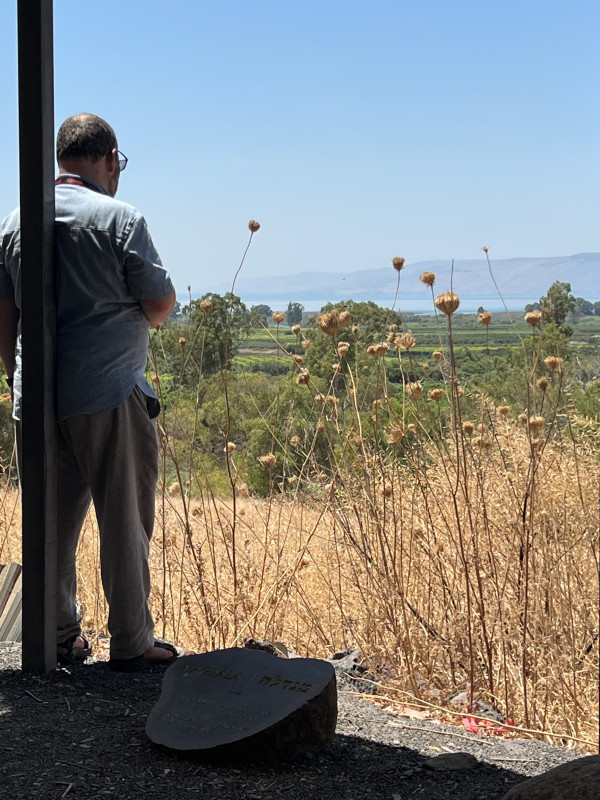 which clouded my ability to see through to what once was.

It is possible to visit the Holy land and stay isolated in one’s own tradition, faith and political outlook but this study pilgrimage challenged us to do the opposite and let the place transform us. The pilgrimage brought alive scripture in a visceral way, one which will hopefully similarly enrich others as I preach and minister in light of my experiences.

If you have the opportunity to visit Israel and Palestine I encourage you to do so, and to do so with St George’s College for their scholarship and heart for the place is second to none. They do not just offer hospitality pilgrimages throughout the year, but their work is a practical example of seeking the reconciliation and peace that Jesus calls us to do.  They are a guest house, a college and a cathedral to pray for, but not only for the work they do in Israel and Palestine.  Part of the Diocese of Jerusalem and the Middle East, St George’s College is blessing and a peace that needs sharing well beyond its borders.

With my thanks to the British Regional Committee of the St George’s College Jerusalem Trust for their support and blessing.

The Revd Andrew Avramenko is a Curate in the Benefice of Charlcombe with Bath St Stephen, part of the Diocese of Bath and Wells.  He completed his degree in Theology, Ministry and Mission at Sarum College in 2020 and was ordained a priest in Wells Cathedral in June 2021.

Read the pilgrimage reflection from The Revd Lisa Rodrigues