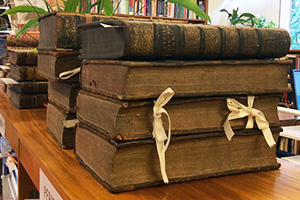 Careful not to exceed the recommended 90 degrees, I lifted the cover. I was surprised and delighted to be greeted by a black and white illustration and the title: A Survey of Mr. Hobbes his Leviathan.

Emboldened by the nature of the book’s contents, I ventured to enquire about what seemed to me to be the intriguing nature of the decoration on its binding.

We were in the second part of our training for the Library Project: learning about book bindings.

And I was getting to know Jayne, the Sarum College librarian, who seemed concerned that Sarum College books were not as impressive as those in the cathedral, so might not retain our interest or sustain our enjoyment. Everyone seemed keen that this project should also be sociable and fun, enjoyment being a key element in sustainability.

The lectures were informative and entertaining and the visiting lecturer provided illustrated notes to jog our memories should we fail to retain all this complex, new information.

And then there was the hands-on bit! Our earlier training came in handy here; gave me the confidence to handle and inspect parchment and pigskin, leather: tanned or tawed, fabric and decorative paper bindings.

We admired marbling, mottling, tooling and ‘tree-ing’ and learned how the various ways of storing books influenced their binding. Not until books were stored upright with their spines facing out, did it become common practice to identify the contents on the spines.

My attention had been grabbed by a tanned leather volume with a mottled decoration – a darker brown colour sponged or stippled in a regular pattern that vaguely reminded me of ostrich skin.

I squinted at it, the resemblance became stronger, but we had heard no references to exotic skins, let alone fake ones. I moved on. I discovered an admiration for the cheap and cheerful plain sheepskin as opposed to the gilt-tooled Moroccan. I peered closely at the construction: the paper and stitching, and gently tapped a fingernail on the boards – listening for the sound of wood or laminated paper.

Confidence and curiosity growing, I ventured back to the mystery volume and lifted its cover. Early bookbinding did not make any attempt to reflect the nature of the book’s contents, but still I was bold enough to enquire: ‘Was there any chance that this decoration, inspired by tales of leviathans, could be an attempt to imitate ostrich skin?’

Whilst the answer was a rather definite no, I was encouraged to stick with it. In the realm of ancient bookbinding, there is still scope for a romantic imagination!