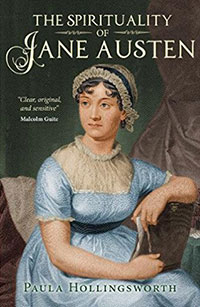 The Spirituality of Jane Austen: Book Launch with Paula Hollingsworth

Author Paula Hollingsworth completed her MA in Christian Spirituality at Sarum College in 2007, and wrote her dissertation on Jane Austen.

2017 marked the 200th anniversary of the death of Jane Austen, whose six completed novels have never been out of print. Best known for her novels, ‘Sense and Sensibility’, ‘Pride and Prejudice’, ‘Mansfield Park’, and ‘Emma’, first published anonymously, Austen commented, critiqued and illuminated the life of the English upper classes. But did Austen’s writings highlight anything about her own spirituality?

In this celebratory book, Paula Hollingsworth explores Jane Austen’s gentle but strong faith and the effect it had both on her life and her writing. Drawing on Jane’s life story, her letters, her friendships, her books and the characters portrayed, Paula shows the depth of Jane Austen’s spirituality.

Free and open to all, wine and refreshments provided
RSVP to bookshop@sarum.ac.uk or 01722 326899