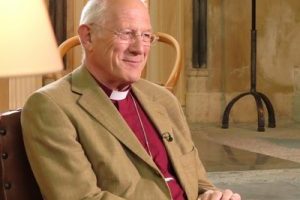 “On a Saturday evening, we were summoned by Tariq Aziz, then the Foreign Minister of Iraq”, says Peter Price, “brought in a convoy of cars through the streets of Baghdad to a large office building that was dark except for the ground floor and the very top.”

“Rumour had it that the lower floors housed prison cells where enemies of the state were tortured. A lift whisked us to the top floor.”

Peace building has its risks, but it is mostly a hidden activity for the long haul. The Rt Revd Peter Price, Bishop of Bath and Wells from 2001 until 2013, might be expected to be a quiet establishment figure. Faith, however, drove him towards more challenging terrain, following Jesus Christ as the Prince of Peace.

For some time, Peter held the Church of England House of Bishops’ portfolios on international development and defence in the House of Lords. Another career landmark was as General Secretary of the mission agency USPG, which also got him involved in international peacemaking work. Today, he chairs the board of the international peace building organisation Conciliation Resources.

Peter says his peacemaking work just developed without necessarily being planned. “Like Topsy, it just grew!”

One major factor, however, was marriage.

“My journey in peacemaking began when I married a County Tyrone lady in 1967”, he says, “just as the Northern Ireland Troubles were starting to rumble. We had to make a decision early on about whether this was something we were going to leave behind us or something we would engage with.

“My wife, Dee, had a slightly spooky incident shortly before we got married. She was walking through The Markets area of Belfast when she was approached by a man who said to her, ‘You look very happy, you’re marrying soon, and the man you’re marrying will be a healer’. We did not think much of it at the time, but have increasingly concluded that our work in peace making has fulfilled something of that vocation.

“An inspirational figure in the late 1960’s and early 1970’s was Terry Callan. Terry was a Rector of an inner city parish in Belfast. He introduced me to ground level peace building. Back then you could almost set your watch by the beginning of petrol bombings and confrontation. Each evening, Terry would place himself on a bridge between the confronting groups.

“I watched as he would tap lads from his own community on the shoulder and send them home, telling them he would be round later to see them. A superb pastor, he stayed in touch with a lot of these fellows and their families.

“One night, I was driving to visit the Anglican Franciscans, who were based in a very complex and divided part of North Belfast. I got lost as all the streetlights were out after a gun battle between the IRA and the army. There was a lone man walking the deserted streets. I stopped the car, very obviously English, and said that I was lost. He said yes, it must be hard to find my way when it was dark because, ‘The boys have been having a great time having a rattle at the army’, and then happily to give me directions. It was a conversation that encapsulated the contradictions of Belfast, deeply troubled yet incredibly friendly.

“Much later, after two corporals were murdered in dreadful circumstances at an IRA funeral, I visited Cahal Daly, the inspirational Roman Catholic Cardinal, who at the time was not popular with Sinn Fein. We talked, and prayed together. I had spent time in small communities who met across the divide, all these experiences were deeply moving and provided hope in the midst of darkness.

“In 1998, after the Good Friday Agreement was signed, my work in Northern Ireland took on new dimensions. The worst atrocity of The Troubles, the Omagh bombing, happened that summer in my wife’s home town. By chance were nearby on holiday, and visited the aftermath as representatives of the Archbishop of Canterbury.

“I met Martin McGuinness at the Memorial service, and he said to me simply, ‘Bishop, we’re in this in the long haul’, and I realised things had changed.

“I never got anywhere near Ian Paisley until he came to my house during a holiday in the West Country while I was Bishop of Bath and Wells in the 2000s.

“‘When you get to my age, you start to wonder if you’ve done it all right’, he told me. It was the beginning of a relationship, and he invited me over when he became First Minister of Northern Ireland.

“He once told me, ‘Martin McGuinness is a very fine Catholic boy’, and I wondered how different history might have been if he’d been able to say things like that a generation before.”

And what about that visit to Baghdad?

“We were in Baghdad, during what turned out to be the end of the Saddam Hussein’s period in power. I was part of a delegation seeking to offer solidarity to Christian communities, as well as observing the impact of sanctions on ordinary Iraqis.

“We had been cautioned by both the UK government and the Archbishop of Canterbury not to allow the visit to be used as propaganda by Saddam. So, as we rose through that vast building, I turned to my colleagues and said, ‘When we get out of this lift, do not smile, there will be a TV camera, and the footage will be sent around the world.’ True enough, there was!

“When later a formal photograph was taken, there was one smiling Tariq Aziz, and the rest all with funereal expressions. Although little appeared to be achieved from our meeting, we felt that it was worth meeting face to face. Sadly, the subsequent war and internal conflicts were not avoided.

“I spent time in Latin America in the 1980’s and early 90’s occasionally reporting for BBC World Service. Visiting El Salvador in 1988 our delegation had been advised to say that we were tourists. The only trouble was that there were few tourists to this war-torn country. Few of us expected to be believed. To make matters worse, the BBC had given me a bag with branding all over it, and I had hidden my tape recorder beneath my underwear.

“When we arrived at the airport, I scanned the customs officials to find if one was wearing a wedding ring. I found one. As I opened my bag I looked him straight in the eye and asked how his family was. He let me straight through. As we left the airport, some others from our group were spreadeagled against the wall and were subsequently interrogated by the police. All were eventually released, but any cover we thought we had was blown.

“Among the people whom we met during our time was the Lutheran Bishop Medardo Gomez. Later he was arrested, imprisoned and threatened with execution. I was involved in a campaign to release him, which eventually happened.

“I didn’t see him again until 2011, at gathering for those caught up in El Salvador’s 1980s troubles. He stood up to talk about his experience. In the New Testament, he said, Peter was in prison, the church prayed for him, and angels came to release him. ‘I was in prison’, he said, ‘the church prayed for me, and human angels came to release me.’ It was one of the most moving moments of my ministry.”

The Rt Revd Peter Price’s book Things That Make for Peace: A Christian Peacemaker in a World of War will be launched at Sarum College, Salisbury, on Thursday 22 February at 6.30 p.m. Peter will be in conversation with Major General Tim Cross CBE, a Church of England Reader, who was General Officer Commanding, Theatre Troops, Iraq from 2003 until 2007. The event is free and open to all. RSVP to bookshop@sarum.ac.uk or 01722 326899.