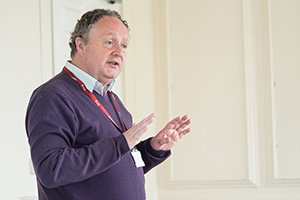 What is a Good Life? Discuss.

Home News What is a Good Life? Discuss.

What does it mean to live a good life? That is the question for the second of three ‘Salisbury Conversations’ on March 13 facilitated by The Revd Canon Professor James Woodward, Principal of Sarum College.

With James around the table in Salisbury Cathedral will be The Bishop of Salisbury, The Rt Revd Nicholas Holtam, Church of England lead in the House of Lords on the Environment; Natalie Haynes, comedian, classicist and author of The Ancient Guide to Modern Life; Harun Kahn, secretary general of the Muslim Council of Britain; and, Leo Johnson who heads PwC’s Disruption practice and co-presents the Radio 4 series “Hacking Happiness” – and is Boris Johnson’s brother.

‘Sarum College welcomes the opportunity to support our neighbours and friends in the Close, Salisbury Cathedral, and BBC Wiltshire as part of our shared commitment to expanding the horizons of learning,’ says James. ‘Do come and join us in this venture.’

The initiative aims to extend the discussion about the potential for a new social order. Each Salisbury Conversation will explore a different aspect of society from the principles that underpin the way we govern ourselves and the notion of how to live well, to hate speech and the tenor of public debate.

James Woodward has been Principal of Sarum College since October 2015. He has a particular concern for building and enabling an outward facing learning life for the College which is rooted in the Christian tradition and nurtures interdisciplinary conversation together with thinking and practice around the nature of human flourishing.

Conversations will take place in the Cathedral on the 6, 13 and 20 March and broadcast on BBC Sounds and BBC Wiltshire at 7pm the following evening.