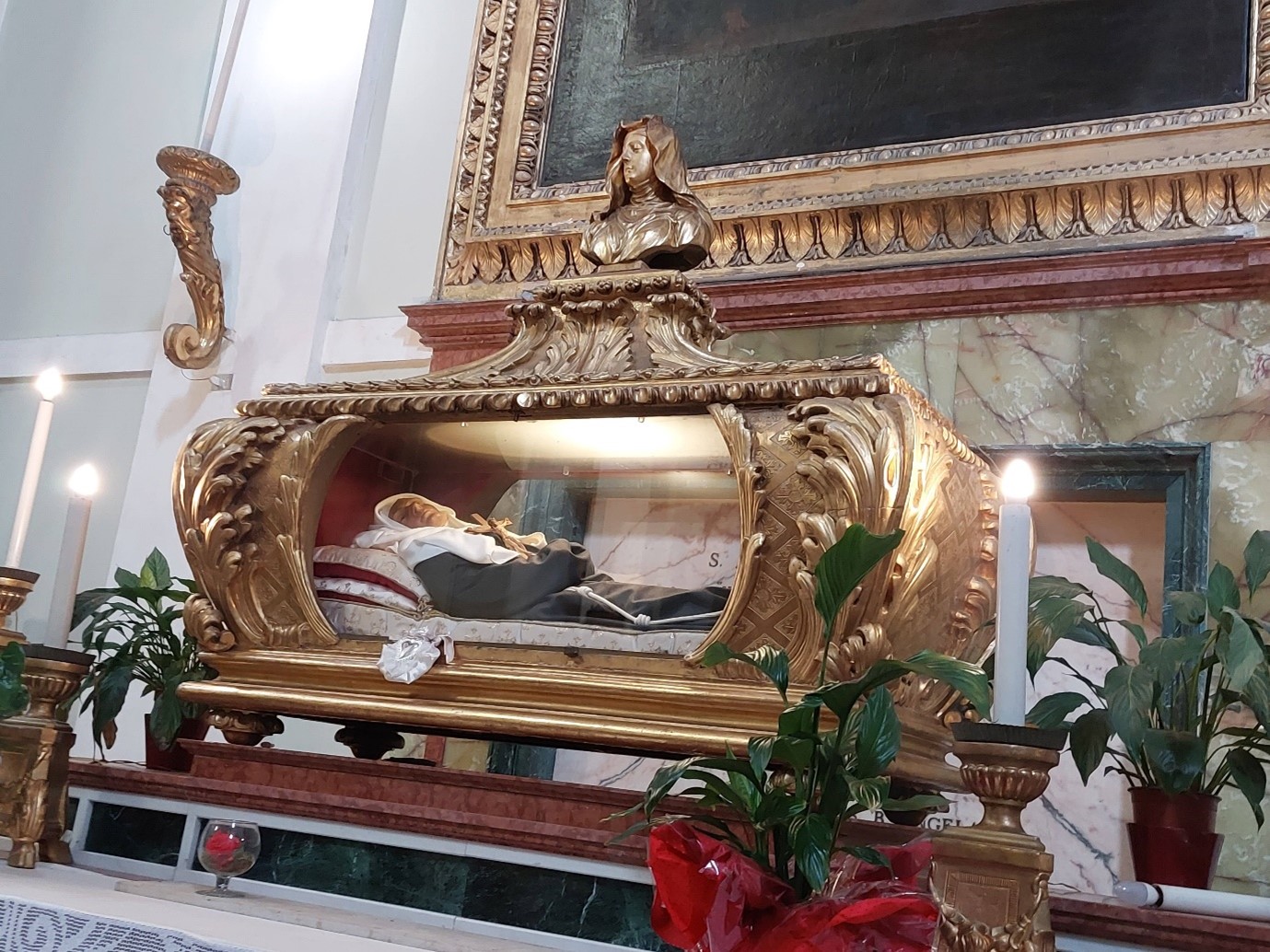 Notes on a Journey to Assisi

Home News Notes on a Journey to Assisi

While many medieval male theologians (such as Thomas Aquinas, Bonaventure and Francis of Assisi) had significant-enough fame with their own lifetime to warrant the careful preservation and wide circulation of all of their works, many medieval women did not have the same fortune. Indeed, the little-known Angela of Foligno – an Umbrian laywoman who died in 1309 but was only canonized very recently in 2013 – produced, in collaboration with Franciscan friars – 37 mystical-theological texts, but the original versions do not survive. While sometimes this is not a problem, in the case of Angela’s textual conglomerate, the surviving manuscript versions of these texts are often so different that it has proven impossible for modern scholars to produce a definitively accepted reconstruction of the lost original. As such, careful consideration of each surviving manuscript is required.

I was fortunate to travel to Assisi at the end of September to use the archive of the Biblioteca Comunale in the Basilica of St Francis in Assisi where I was able to consult the earliest-surviving manuscript of Angela’s texts. While I am a textual historian rather than a historian of buildings or physical objects, the physical manuscripts, the handwriting used and marginalia (any notes, comments or illustrations made in the margins of a manuscript folio) are often just as important as the texts contained within them.

While in Assisi, I also had the opportunity to visit a lot of the surviving original Franciscan sites – such as San Damiano and the Porziuncola – and the San Rufino Cathedral (which pre-dates Francis and Clare).  A particular favourite of mine is in the Upper Basilica of St Francis, a stained-glass window immediately to the left at the entrance which features Christ holding a miniature-sized Francis on the left, and the Virgin Mary holding the Christ child on the right (below). 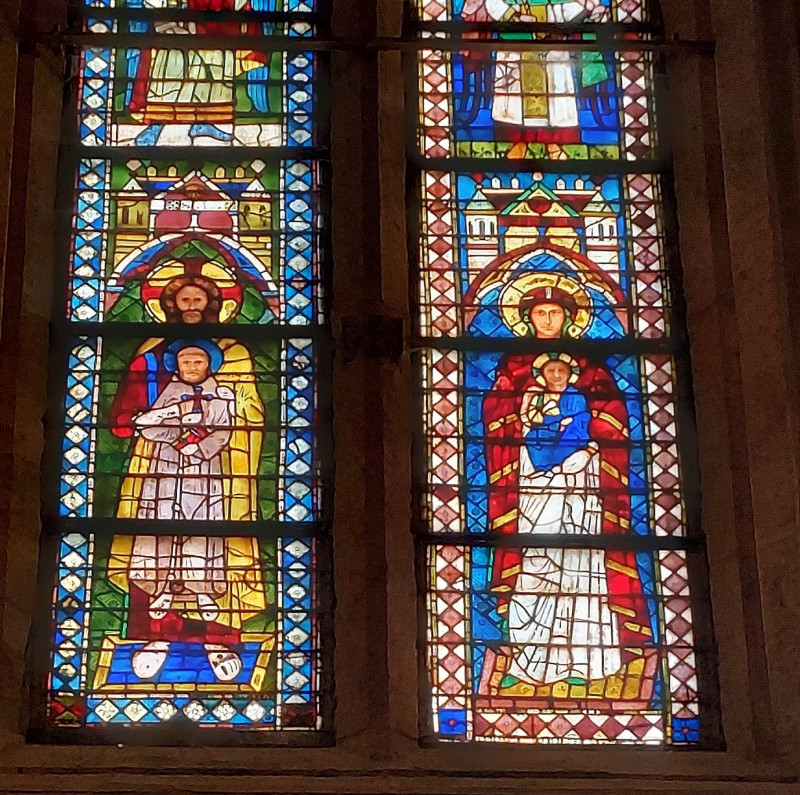 This window existed in the late-thirteenth century, and was seen by Angela of Foligno when she went to Assisi on pilgrimage; after seeing the window, Angela – according to her texts – fell to the floor and started screaming out of fear of losing the presence of God. This event gained the attention of the friars in the Basilica, and one of them became her scribe and confessor.

In the museum of the Porziuncola at the Basilica of Santa Maria degli Angeli (just outside of Assisi), I was very lucky to see an artwork I have studied for a few years which depicts Francis holding a book reading “this was my bed in my life and my bier in my death” (hic michi vi venti lectus fuit morienti) and was, according to legend, painted on the wooden board of Francis’s bed (below left). 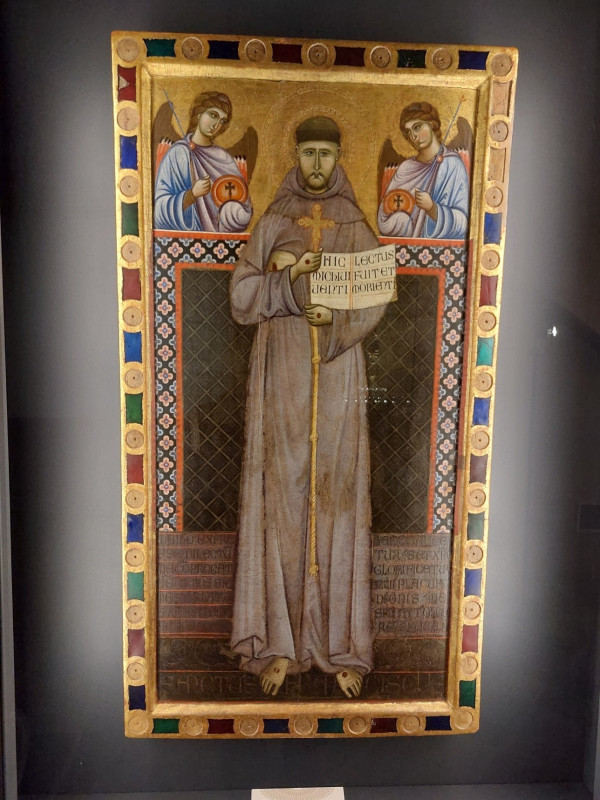 I believe that Angela of Foligno, having seen this image, then composed a short laud using very similar imagery where she refers to the Cross as a bed: simultaneously her and Christ’s marriage bed, and the bed on which she dies. Having seen scans of this image for years (including having a copy on my office wall at Sarum), it was quite remarkable to see the real thing and to see the depth of the colours for myself.

A particular highlight was visiting Foligno and seeing the tomb of Angela in the Church of St Francis there. The public tomb – created after Pope John Paul II had preached about Angela – contains a modern sculpture-reliquary of Angela (a common feature in Italy to give the appearance of an incorruptible saintly body) in a glass coffin (below right). 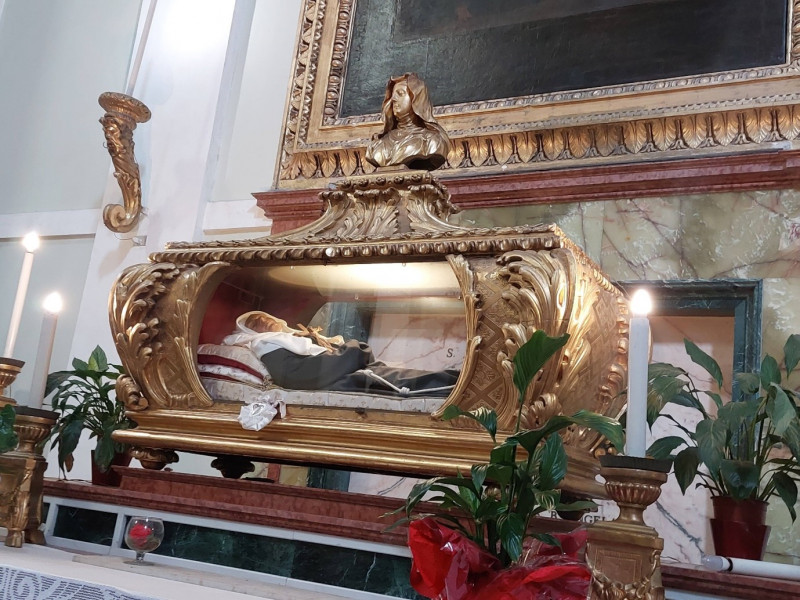 The tomb has the inscription ‘S Angela da Foligno’ (the previous ‘B’ was replaced by an ‘S’ after her canonization), her dates ‘1248-1309’ (although 1248 is completely speculative), and the title ‘Magistra Theologorum’ (‘teacher of theologians’) first used to describe Angela in 1624 by the Dutch Jesuit, Maximilian Sandaeus (below left). 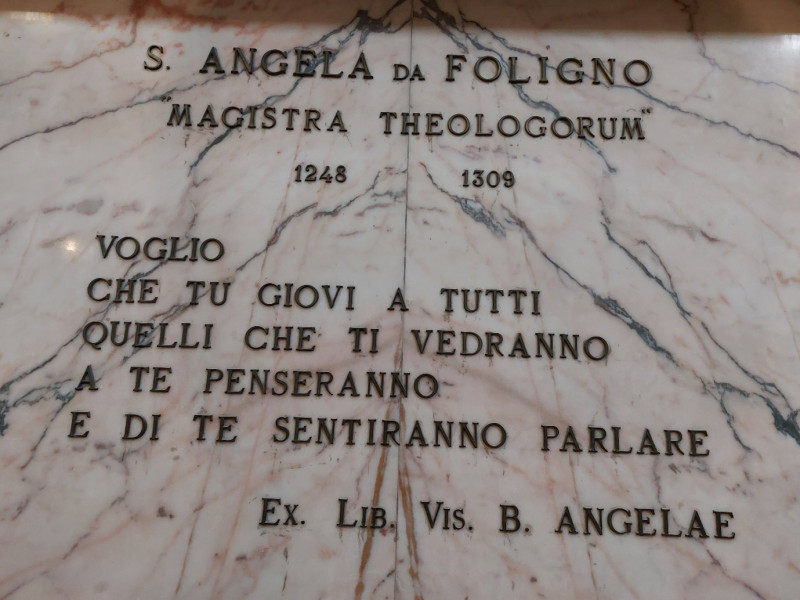 Due to a chance meeting with the historical archivist of the city of Foligno I was incredibly fortunate to also be allowed to see (and touch) the medieval wooden reliquary of Angela no longer used (right). 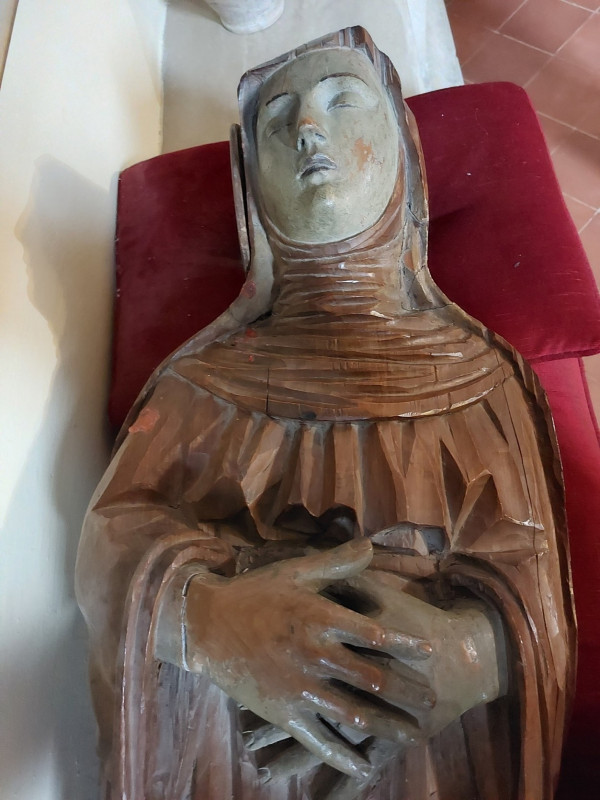 While the figure of Francis of Assisi rightly towers in Christian cultural history, it is important to remember that many female figures associated with the Franciscan movement are also very worthy of study and remembrance both in academic and devotional contexts.

Dr Michael Hahn is Programme Leader for Postgraduate Programmes in Christian Spirituality at Sarum College. He specialises in medieval spirituality, the Franciscans, and the development of mystical theology.

On 19 October 2022 Michael will lead a day on female Franciscan theologians:

Clare of Assisi and the ‘Other’ Franciscan Female Theologians