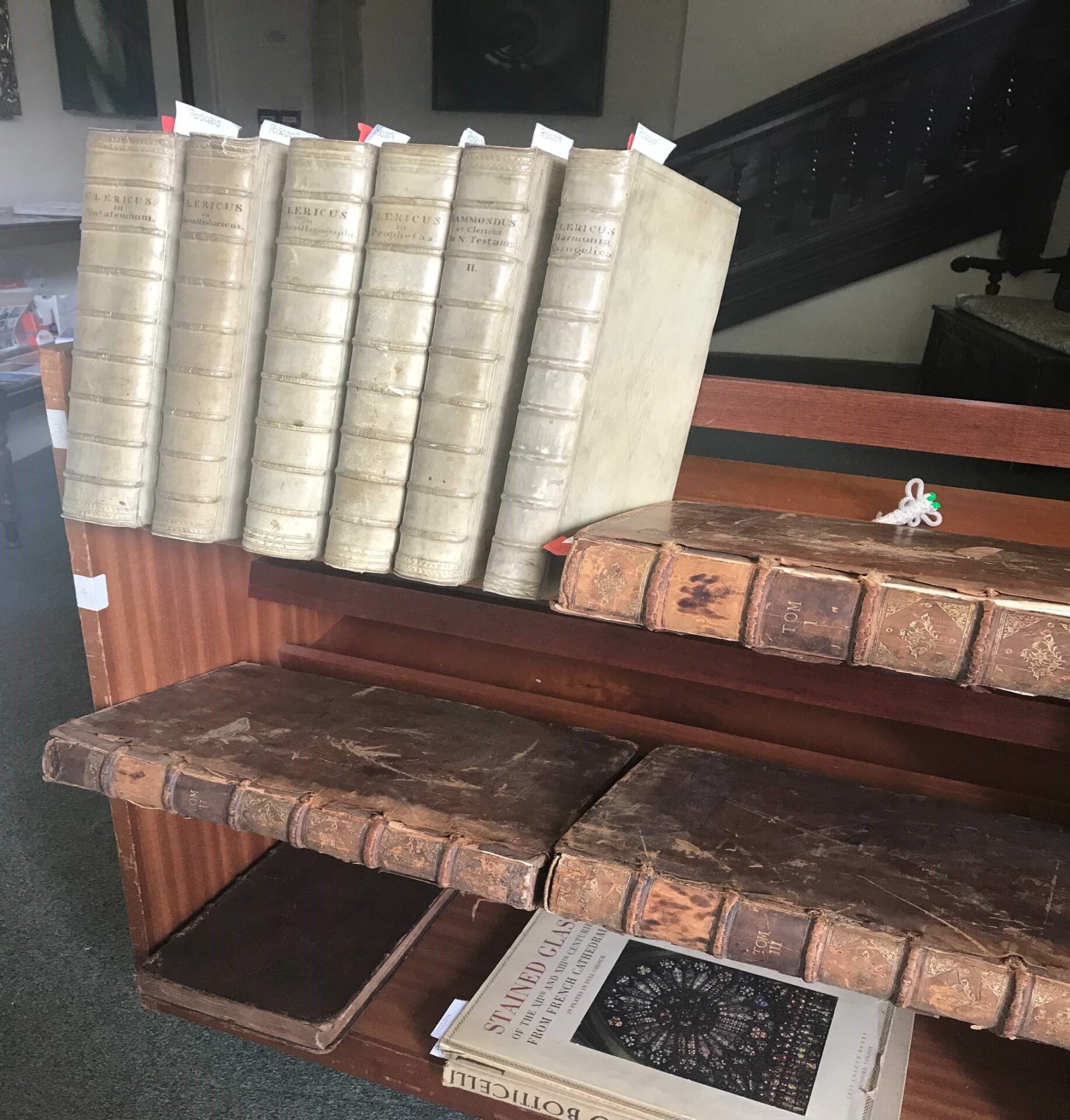 Summer holidays mean the rest of the team are taking breaks. My ‘ordinary’ life is temporarily on hold and I’m glad to have this regular tryst with some very dusty old books to add some stability to my days.
We have a new volunteer who has a slightly different set of skills and more experience. I’m so glad she has joined us and hope we can make her feel welcome.

We finish setting up the work station and make a start. Jayne has warned us that, with our consent, we may be interviewed about the project for the cathedral archives. A volunteer with a recording device arrives just after we finish our first book of the day.
Our interrogator is skilled and the interview works as a friendly chat. I do my best to convey the delight I feel to be associated with the project and the privilege of handling such an interesting collection of old books.
The time goes quickly, our interview draws to a natural close and, somewhat relieved, we decline to hear ourselves in playback. We leave our voices for posterity…

Somewhere in the morning there was a coffee break. Actually we all enjoyed a lemon and ginger infusion and some rather good chocolate biscuits.

Afterwards we get to grips with our second book; bound in parchment on wooden boards, volume I of II and in very good condition. A book made to last.
The date, 1672, sets me thinking. I wonder how long it took to prepare and produce such a book. Who was it made for? What was the state of its immediate world?
And then there is the possible symbolic significance of those illustrations created in an age more practiced in reading images than words.

I google for some facts, but am left somewhat confused. I am informed that In 1672 William II was on the throne of a restored monarchy. But also that he died in 1650 and that his son William III was born a few months after his death. I am also informed that Charles II was on the throne from 1650 until his death in 1685.
Oops! Unravelling this complex muddle of Dutch, Scottish and English history made me aware of how important it can be to ask the right questions!

What doesn’t seem in question was that the country was on the verge of bankruptcy and was at war with Holland. It was in fact a disastrous year for Holland – at war with and being invaded by England and France.
And John Bunyan was released after serving twelve years imprisonment for preaching without a license.
Religion divided Britain then in much the same way Brexit does today.
General online information about the making of 17th century books seems sparse; possibly because I’ve not yet hit on the key words to reveal it.

I do discover that an icon in the history of printing, William Caslon, who in the early 1700s was designing typefaces for British press companies, is claimed to be the designer of the font used in the first printed version of the US Declaration of Independence.
However, my wrestle with Google leaves me none the wiser about the conditions in which our Greek and Latin volume came into existence.